From the floor: From Analog to Algorithm 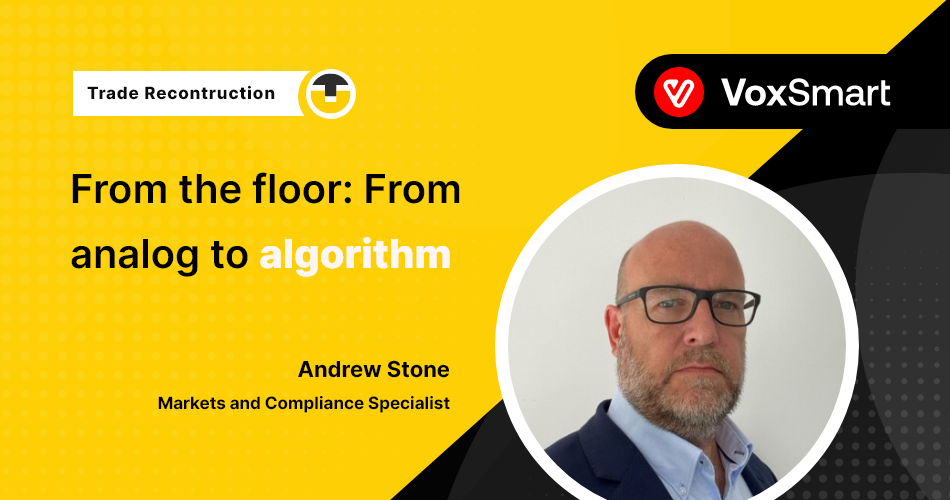 As technology has advanced, so too have trading desks. What was once a heavily manual system of booking trades is now a seamless process of automated means. However, despite greater access to automated technology some firms still rely on manual controls to reconstruct trades.

Hear what ex-broker turned VoxSmart markets expert, Andrew Stone, has to say on the advancements of modern technology and the benefits of automated solutions.
–

From Analog to Algorithm (aka from Dinosaur to Modern Man!)

Trading has come a long way since the analog days of my broking career. Back then trades were conducted over the phone, tickets handwritten and collected by the ticket boys to be delivered to the settlements department to process via vacuum tube. Each broker would have a notepad to record the trades (an old-fashioned spiral bound notepad, not the electronic version used today!) and a call would be made at the end of the day to the various bank’s traders to “check out” and confirm the days trades.

It was during one of these checks that a client DK’d (don’t know’d) 2 trades that I’d done in what was the current German 10yr Bond (I’m saddened to report that it expired some 20 years ago, a little like my broking career!). Unfortunately, the check-out was done by a colleague as I had left early for the Bank Holiday weekend, so I was informed by a message left at a hotel reception! Did I mention this was before most of us had mobile phones?

This meant that I had to cut short my holiday and return to London and make a trip to the dreaded Tape Room! It was a space resembling a 1960’s version of a supercomputer, rows and rows of double spool tape machines that produced the kind of heat that could melt steel. It wasn’t a place that you wanted to spend any longer than you had to, and certainly not somewhere to spend your Bank Holiday weekend!

After many fruitless, sweaty hours of listening to tapes that should have contained my desk recordings but that actually covered every desk but mine, I finally found one of the trades. With this information I managed to convince the client to book both trades – saving myself a potential career shortening loss!

Today’s trading floors are very different. Banks and brokers still use voice trading to transact business in certain markets but in others the choice of communication channels has increased drastically. Messaging and chat platforms have become the norm, and together with emails now creates the modern trading desk.

Yet despite these advances to the front office, from improved communications to automated booking and pricing and trading systems, one thing remains largely a manual process. Trade Reconstruction.

More and more regulators are requiring financial institutions to “show their work” by disclosing all communications that relate to a trade or series of trades. Banks and broking firms currently use hundreds of man-hours on a process that can be reduced to mere minutes with the right system.

What’s more, an automated trade reconstruction solution fosters additional benefit beyond that of meeting regulatory requests. Internal teams can use it to investigate profit and loss swings, or to look at unusual trading patterns whether they be trades with new counterparties or transactions taking place outside of normal hours. The right trade reconstruction solution can protect firms from fines and reputational risks and save them money whilst doing so.

If it had existed in the late 80’s it may have even saved my weekend!

In order to comply with regulation as laid out in the Dodd-Frank Act of 2010 and the more recent CFTC swap data rewrite, firms have a mere 72-hour window to submit trade reconstruction requests. This put firms under immense pressure and removes traders from their principal responsibilities.

Get in touch with us today to find out more about our Automated Trade Reconstruction that could’ve spared Andrew a weekend in the tape room cellar!

If you liked this, then you may also be interested in: