Looking back to look forward 2022: Regulators up the ante 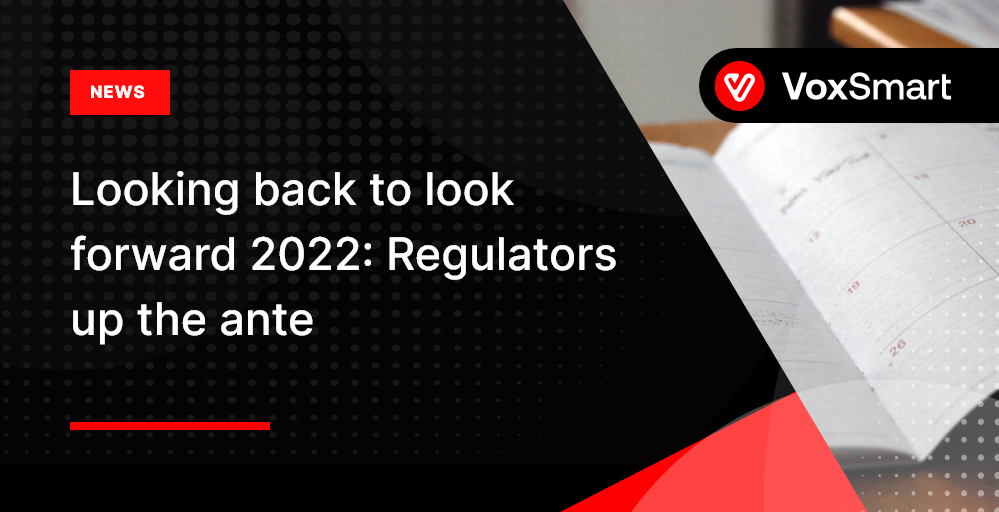 Regulatory authorities in 2022 showed no sign of slowing down as they revved up efforts to ensure compliance across markets. In this blog we take a look at just some of the key news stories which rocked financial markets and regulated industries over the last 12 months.

Additionally, we provide some insights for 2023 to help enable your firms to get ahead of the game when it comes to confidently dealing with the challenges yet to come as regulators are set to up the ante for 2023.

It has been a turbulent year for FX markets with volatility across the asset class high. February of this year saw the gruesome Russian invasion into Ukraine which sparked chaos across FX markets. From a trading perspective, the invasion led to a plethora of newly sanctioned bodies and a significant change in the market structure supporting trading in the Russian rouble, reverting back to bilateral and voice execution of old.

However, regulators are beginning to turn their attention to trades that broke from established patterns that have occurred since February. Yet with trade information and communication data often sitting in two separate buckets firms now face the challenge of connecting the dots between these trade communications.

“There is still significant risk in OTC FX markets due to the inherent reliance on vocal communications, often in a plethora of languages, to agree and book trades. This is the challenge that faces financial institutions trading in global currencies – the ability to efficiently capture and translate conversations in multiple languages in real time. Moving into the new year, this is where we are expecting to see firms turning to technology more in order to exact effective risk management in OTC markets.” – Group CEO, Oliver Blower.

2023 has seen regulators significantly increase enforcement efforts when it comes to communications across encrypted messaging platforms, in particular via WhatsApp. Since the onset of the global pandemic, WhatsApp has fast become the de facto messaging application for traders across asset classes.

However, in May it was announced that the SEC had launched a full investigation into the use of mobile communication platforms following actions against a leading tier one bank earlier this year. The outcome of which saw 11 Wall Street giants fined in excess of $1.8 billion relating to “widespread” and “longstanding” failures in record-keeping practices across encrypted messaging services in September.

For many this came as no surprise as research had suggested WhatsApp employee blind spots with many institutions failing to adequately capture communication across the platform. In order to practice effective supervision and risk management, Group CEO Oliver Blower called for firms to embrace modern technology over restrictions.

In light of fines handed out over the last 12 months, regulators are expected to continue efforts to ensure compliance across the channel leaving firms open to additional risk should they fall to adequately monitor the leading messaging service.

“A decade long cost control measure to encourage staff to use their own devices for work communications is being reassessed with risk management in mind. We are seeing a significant shift back to corporate issued devices in the wake of the $2billion in fines doled out by the SEC to the wall street giants. However, firms need to be able to empower staff to continue to communicate with clients through the channels that they do currently, in a safe way. This means accounting for the rise in social messaging applications, such as WhatsApp, in business communication.”  Group CEO, Oliver Blower.

Get regulator ready for 2023 – Take our short quiz to assess how proactive your approach to surveillance is here!

One year following the 2021 collapse of the family office saw the arrest of Bill Hwang, founder of Archegos Capital Management for federal racketeering, fraud and market manipulation charges. Federal indictment against the founder shone light on risk controls, or lack thereof, on sophisticated trading desks.

European Securities and Markets Authority (ESMA) recommended the creation of framework in order to enable supervisors to better monitor risks related to derivatives. “Looking forward, further work is needed to put forward a framework whereby different regulatory reporting could be analysed together to enable Authorities to monitor risks” concluded the regulatory authority.

“It would be a brave firm that decides against carrying out a root-and-branch review of the context around their swaps trades as the post-Archegos analysis rumbles on.” commented CEO Oliver Blower following the arrest. With recent studies suggesting that 42% of employees believe their firms to be poorly positioned to meet the regulatory requirements relating to trade reconstruction, 2023 will be the year to get ahead of this issue with automated technology helping firms achieve this feat.

Following a delay in the original implementation date of 25 May 2022, the CFTC rewrite has in recent weeks gone into effect with the aim of correcting errors in swap data. The reporting framework now includes harmonised critical data elements developed by the Committee on Payments and Market Infrastructures (CPMI) and the International Organization of Securities Commissions (IOSCO).

CFTC’s original data-related swaps rules were established under the Dodd-Frank Wall Street Reform and Consumer Protection Act, mandating the reporting of swaps data contracts to SDRs and the public dissemination of swap data, with the aim of improving transparency what was an opaque swaps market.

“The manual process of sifting through these disparate data sets and connecting the dots between trades, particularly during periods of heightened volatility, will continue to be a major headache. To meet the spirit of this CFTC re-write, expect financial institutions to lean on the support of automated technology to connect communication and trade data so that compliance teams can be empowered to check exceptional swaps trades almost instantly.” – Group CEO, Oliver Blower.

A busy year for regulators and by default compliance teams alike! The aforementioned issues are expected to colour the regulatory landscape of 2023. Assessing your firm’s ability to face these challenges is vital in order to best position your firm for the year ahead.

Not only was 2022 a busy year for regulators but also for VoxSmart too as a company! We celebrated many milestones together including inclusion on The Sunday Times 100 Britain’s fastest growing private companies, a third consecutive feature as part of The RegTech 100 and front-page coverage as part of Raconteur’s Future of Finance Magazine (distributed by The Sunday Times).