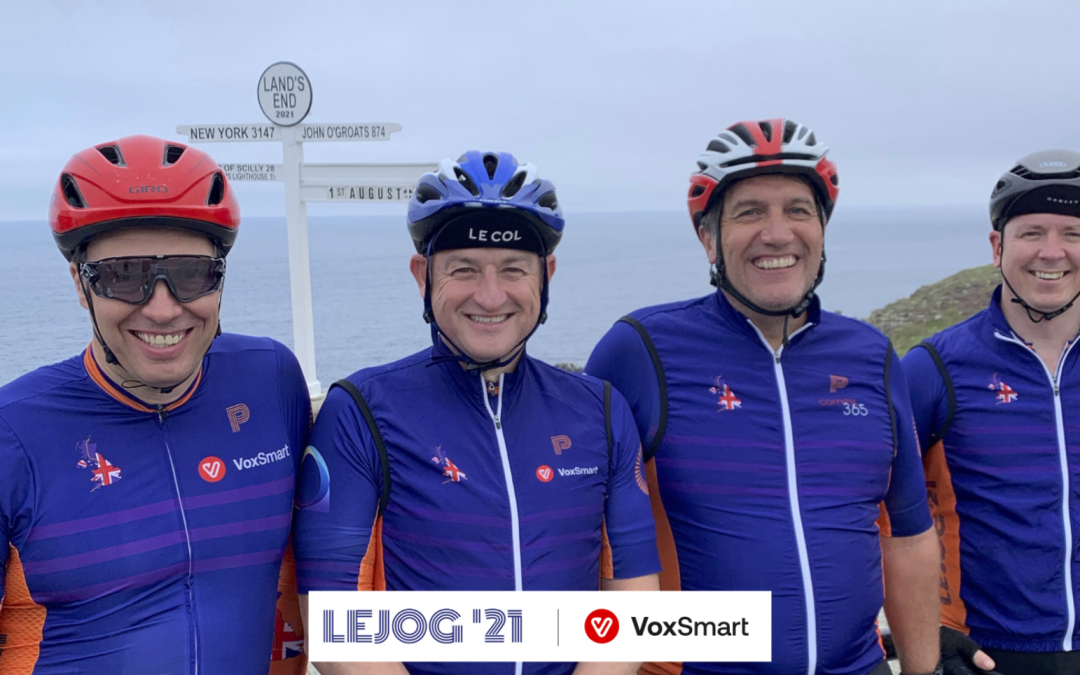 VoxSmart CCO, Alan Giles, takes off on the first day of August, 2021, to cycle over 1000 miles in 11 days.  From Land’s End to John O’Groats, Alan and 3 other ex-military companions will travel through the Cornish hills, the Cairngorms, the Scottish Highlands and more,  gaining donations for Shine Cancer support, an incredible charity who provide support to people suffering with cancer in their 20’s, 30’s and 40’s.

Todays the day! Our victorious cyclists have beaten one of the hardest bike rides in the world for a very worthy cause. Bad weather and flooding in Scotland may have thrown some worries into the mix, but our team have just arrived in John O’Groats; the final stop on their journey from one end of the country to the other. Exhaustion is clear in our squad, but that won’t stop them from celebrating tonight, along with their wonderful support team, who helped them cross the country in 11 days.

Congratulations to Alan Giles, Matt Fell, Rich Jones and Shaun Nicholls on cycling over 1000 miles to raise money for Shine Cancer Support, and thank you to everyone who donated and sponsored the ride. You beat LEJOG! 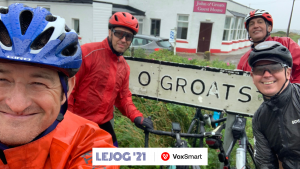 Our heroic cyclists have now left Market Drayton, are well past Carlisle, and are planning to arrive in Crianlarich tonight after brutal week of travelling. The weather has taken a turn for the better, but some of our cyclists are starting to show signs of illness. Nevertheless, they charge forwards, and expect to reach John O’Groats by Friday the 12th to officially complete LEJOG!

Matt Fell, another gentleman in LEJOG also spoke to us about how he got involved with LEJOG, and what he did to prepare for it…

“Doing LEJOG seemed like a good idea when it was suggested over a year ago and now it is upon us, it does not seem as much like a good idea, especially as the team is down to 4. So i’m taking part to support and ensure Rich gets to the end for his charity SHINE. 1000 miles is a long way and we’ll need all 4 of us to keep us going. It’s a challenge and for a good cause so I’m here to support Rich in his endeavours and cycle with him to get to John O’Groats.”

“In terms of preparation I took my bike on holiday to Menorca for 10 days at the start of July and got some miles in then.  Other than that I’ve ticked along with a littel each month but nothing specific. Work constantly gets in the way.” 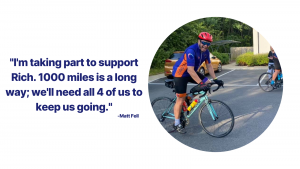 Having since reached Wellington, our team are taking off from Monmouth, heading through Hereford and Leominster and will arrive in Market Drayton tonight, after a 96 mile cycle. The weather has been kind so far, but upcoming forecasts of heavy rain is keeping our squad on their toes.  We’re now a third of the way into LEJOG, and the saddle has started to become a bit brutal. Nevertheless, our cyclists are powering on with no holdups or serious setbacks in sight. Keep going team!

We also got the opportunity to talk to Rich Jones, another cyclist participating in the cycle, and ask him about how he got involved with Shine Cancer Support.

“I originally got involved with Shine when my wife, Jody was suddenly diagnosed with Stage 4 Bowel cancer at the end of 2017. From the outset they have been a huge support for both Jody and I, and continue to be. They are only a small charity but the moral support and advice they give to cancer patients in their 20’s, 30’s and 40’s and their families is amazing.”

Rich also got to tell us about how his goal of raising money for Shine turned into him attempting one of the most difficult bicycle rides in the world.

“I wanted to give something back to Shine, and therefore started looking for ways that I could raise money for them. Jody swam the English Channel while still on Chemotherapy, so anything I did had to be fairly epic. I had done a few Ultra-marathons previously to raise money, but I didn’t think that my knees would thank me for doing that again, so i started looking at bike rides. I had planned to do the LEJOG ride as a part of an organized event, but it was cancelled due to the pandemic. I was still determined to raise money for Shine and do the ride, so I got together with John and we decided we would organize it ourselves.”

“The planning has only been going on for the last 12 months, but because of the original event, I have essentially been training for the ride for about two years.  In that time I have covered more than 14,000 km and climbed more than 300,000 feet. As far as the planning is concerned, it has been relatively easy to get off the ground. There have been a few complications along the way, but the main structure of the ride hasn’t really had to change, and we’re raring to go!” 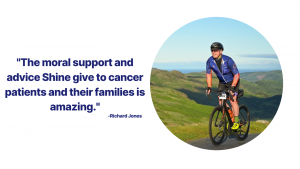 Our team have travelled to Bodmin, where they stayed last night, and are now well on their way to Somerset. A light sprinkling of rain has done nothing to dampen our teams spirits, although a broken bike chain and pulled muscle on Al’s part has meant that a break was badly needed. Bravely back on their bikes, and having cycled over 120 miles in the last day and a half, they’re looking forward to a long rest tonight in Wellington.

We also got to speak to Alan, our CCO,  about  why he chose to get involved in such an ambitious (and rigorous) fundraiser.

“I have always tried to do my bit when it comes to using my profile to raise funds for worthy causes. I think its important to give our time and effort to help others less fortunate than ourselves, and active participation in charity causes is so much more satisfying, as opposed to just putting your hand in your pocket.”

“Nearly 3 years ago, my wife and I were at a funeral for another friend, a young mother who had succumbed to cancer. During the gathering that followed, a couple of us mentioned wanting to raise money for cancer charities  that support families during and after cancer, whatever the outcome.”

“We decided on a LEJOG ride, but that got delayed as the other guy had a serious back injury and couldn’t take part. I then spoke to John Wright (unfortunately not taking part on this ride due to injury) and he mentioned he was a part of a group of ex-military guys who were going to do the LEJOG ride. I opted to join them. John, Shaun Nicholls and I actually joined the Royal Signals together on the 4th of September 1984! The other two guys, Matt Fell and Rich Jones, John new from his later military career”, Alan adds.

“Upon getting to know Rich, I found that his wife is suffering with Bowel Cancer, and is Supported by Shine Cancer Support. This group is often overlooked, since children’s and elderly cancer charities receive more funding.. I knew then and there that I would support Shine during LEJOG.”